For the 15 high school students who attended the 29th Annual Film Institute of the Fort Worth Metropolitan Black Chamber of Commerce, they came away saying “Coke Is The Real Thing.” 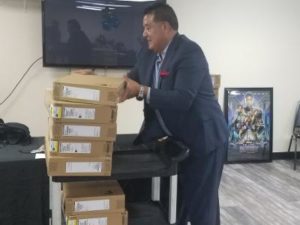 This year’s Institute, held last month at the Forest Hill Convention Center, featured a major surprise for the young participants. Ish Arebalos, director of public relations and communications for Coca-Cola Bottling Company, presented each student with a brand new laptop computer. Coca-Cola has been a title sponsor of the annual event since its inception 29 years ago.

“These computers were definitely a worthy surprise to our students, who some we know, have the ability to become future filmmakers, actors/actresses, writers, and producers, etc. in the film industry,” said Gwen Barbee, the founder, and director of the Film Institute.

Some of this talent was already showing in the person of Giles Clark, a young entrepreneur who held a book signing at the Institute for his new book, “Be Yourself: Be the Person God Has Called You To Be.” Giles also was the first-place winner in this year’s essay contest. Lola Mills was the second-place winner in the essay competition, and Brailyn Lee took third place. (In the photo below, the winners are listed in order left to right.) 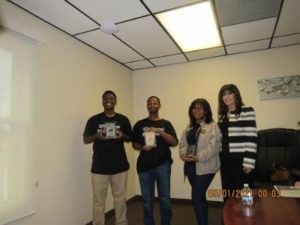 NBC 5 did a story on Giles which can be accessed by clicking on this link: Young Author Recognized for Inspiring North Texas Community.

Join Us for the Chamber’s First Annual Luncheon Since COVID
June 8, 2021